What is Dogecoin? A Beginner’s Guide to DOGE

In the seven years since it was first developed, Dogecoin has risen out of the crowded space of Bitcoin alternatives to reach the top twenty cryptocurrencies by market capitalization. The currency has earned endorsements by celebrities as diverse as Elon Musk and Snoop Dogg, who helped propel its ascent.

So what is the secret to Dogecoin’s success? Why, of the thousands of cryptocurrencies competing for market share, did it achieve prominence? Answering these questions is actually an insightful case study into the nature of cryptocurrency.

Dogecoin was founded by software engineers Billy Markus and Jackson Palmer around the end of 2013. The idea started out as a joke; Palmer was observing the many coins trying to imitate Bitcoin’s success at the time, so he tweeted that he was “investing in Dogecoin...pretty sure it’s the next big thing.” Some of his friends suggest that he actually do it, so he did.

At the time, a viral meme of a Shiba Inu dog had just exploded. It usually features a picture of a cute Shiba Inu with a funny facial expression, coupled with captions written in rainbow Comic Sans font with intentionally bad English (Such cool. Much wow!). The meme was one of the most popular of 2013, and Dogecoin rode the wave of its surging popularity.

Palmer connected with Markus, who was already working on a currency intended to have wider popular appeal than Bitcoin, which was mainly the domain of geeks, libertarians, and speculators at the time. Markus simply rebranded the interface for his currency with the doge meme, and Dogecoin was born. 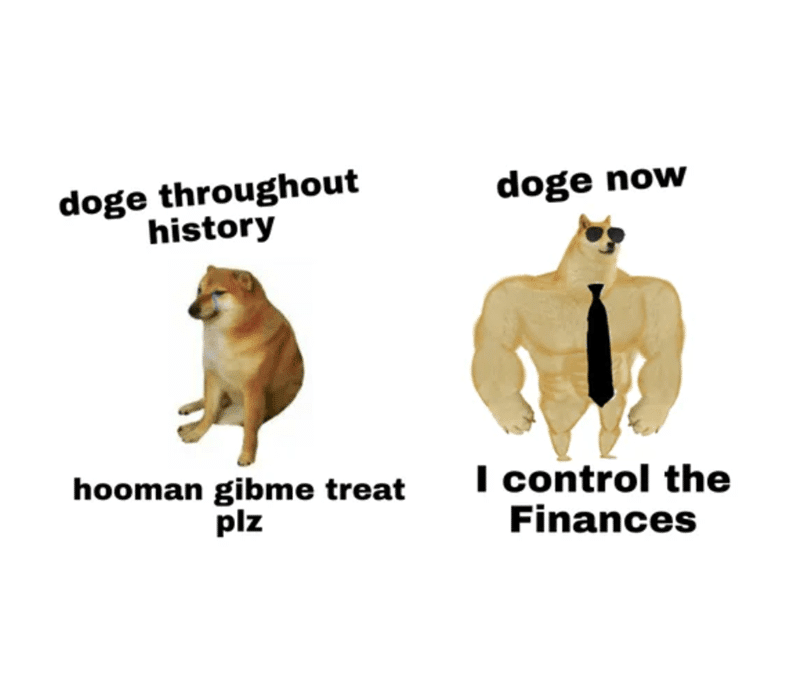 Dogecoin was modeled after Litecoin, and was actually an adaptation of Luckycoin, itself a copy of Litecoin. Like Bitcoin, it is based on a proof-of-work consensus algorithm, but uses Scrypt hashing instead of SHA-256. Scrypt hashing is resistant to the specialized mining equipment used to mine Bitcoin. Instead of ASICs (application specific integrated circuits), Dogecoin is designed for GPU mining (consumer graphics cards).

This feature reflects Dogecoin’s focus as a more accessible currency, designed to appeal to a wider audience of non-experts. However, ASIC manufacturers still develop ASICs capable of mining Scrypt-based currencies.

Dogecoin can be “merge-mined”with Litecoin, meaning miners can mine both currencies at the same time. This is a clever way to attract more hashpower, and thus security, to the network. Still, smaller currencies tend to be more vulnerable to 51% attacks. A 51% attack won’t kill a currency, but it does undermine confidence in the network. Currently, a 51% attack on Dogecoin (or Litecoin) would cost less than 1/20th of what an attack on Bitcoin would cost.

Add Cryptocurrencies to your IRA

With the recent surge in price, the developer fund, a reserve of Doge set aside to finance maintenance and improvements of the code base, has increased in value from $100,000 to over $1.5 million. This means there is plenty of budget to make sure the network keeps working smoothly for the foreseeable future.

Dogecoin has an official wallet client called Multidoge, and is supported by a wide range of hardware wallets and exchanges.

Dogecoin doesn’t offer anything unique in terms of technology— and that’s the point. The whole concept is a mockery of the thousands of coins that pretended to be “the next Bitcoin.”

Dogecoin is an inflationary currency, meaning there is no limit on total supply. At the beginning, Doge miners received a random block reward between 0 and 1,000,000 Doge, before transitioning to a fixed reward of 250,000 on March 17, 2014. Since then, the size of the block reward has decreased steadily, and is now fixed permanently at 10,000 Doge per block. The total supply is currently around 128 billion.

In a way, the huge circulating supply is kind of a selling point. The high price of 1 bitcoin deters a lot of people because for some, it’s difficult to conceive of 1 bitcoin being so expensive. This is actually meaningless, because 1 bitcoin is made up of 100 million satoshis, but there is still a certain appeal to a currency which has a cheaper per unit price.

At first, it may seem that an inflationary cryptocurrency defeats the whole purpose of cryptocurrency— after all, it was developed to counter unlimited monetary expansion by central banks. However, inflationary currencies counter one of the main criticisms levelled at Bitcoin by orthodox economists.

Mainstream economists like Paul Krugman argue that Bitcoin will fail as a currency because its value will continuously go up, causing hoarding. As a result, people won’t spend it, and it will lose its utility as a medium of exchange.

This criticism may be valid - in past years, Bitcoin has largely failed as a currency for everyday purchases, and instead is increasingly viewed as “digital gold,” used mainly for saving. That’s where Dogecoin comes in.

Because Dogecoin is not taken seriously, no one expects its value to skyrocket. Also, since it’s not too expensive, fees are also low and transaction settlement is fast. For these reasons, people are happy to use it for tipping on social media, supporting content creators, and for fun. The community that has grown up around it has actually given it a solid base for valuation.

The Social Value of Cryptocurrencies

With digitally scarce assets like cryptocurrencies, unlike most other commodities in the world, supply usually doesn’t (and sometimes can’t) react to demand. That means if you can generate demand for a cryptocurrency, it’s price will go up and it can become a vehicle for economic value. Some of the value of cryptocurrencies is based on their usefulness and a large part is derived from speculation, but there is also a major social element to their valuation.

Compared to other cryptocurrencies that tout their economic philosophy or advanced technology as selling points, Dogecoin’s success is mainly social. It was never intended to be a political action, like Bitcoin, or a profitable venture, like many other coins. Oddly enough, the fact that it started out as a joke has been key to its success.

Cryptocurrencies are networks as well as assets, and the more people use them, the more valuable they become. This is called the “network effect.” The classic example of the network effect is the telephone.

What is @Dogecoin? Introduction to the open source peer-to-peer cryptocurrency

When the first telephones were invented, they weren’t very useful, because there was almost no one to call, because no one had telephones. As more and more people got them, they became much more valuable. This same effect is a very important dynamic with cryptocurrencies, because with limited supply, the more people use a network, the more valuable they become.

The Dogecoin community has kept the ball rolling by engaging in fun actions, like sponsoring the Jamaican bobsledding team and a Nascar driver, as well as donating to charity projects. When a number of users lost funds in a hack, the community rallied together and donated enough money to cover all the losses. These activities are a hit on social media platforms like Reddit, and keep attracting new users.

Add Cryptocurrencies to your IRA

The Future of Dogecoin

Dogecoin may be the first successful example of massively monetizing a viral internet meme. Dogecoin has minted a few millionaires who were in the right place at the right time. Although they may have just been playing around, by holding on to (or forgetting about) their Dogecoin, a few made hefty profits.

Since memes tend to have fairly short lifespans, you might expect that Dogecoin would have faded away by now, like so many other cryptocurrencies. Surprisingly, more than seven years after its creation, it’s stronger than ever.

However, as time goes on it will have more and more competition from fresher memecoins. This is especially clear looking at the recent surge in interest in non-fungible tokens (NFTs). NFTs more or less represent the institutionalization of crypto memes.

The concept of a memecoin has gotten a lot of mileage, and it can definitely be said that Dogecoin succeeded in its goal of bringing cryptocurrency to a wider audience. It’s conceivable that in the long term Dogecoin could become the currency of choice for some internet communities.

Although the fact that Dogecoin doesn’t take itself seriously has been its greatest asset, this is likely to limit how much it will be able to disrupt traditional markets. Bitcoin may capture market share from gold and other inflation hedges as a store of value, and networks like Ethereum may disrupt financial, legal, and governmental services, but it’s hard to see Dogecoin having a similar effect.

Related: How to Rollover Your 401(k) into Bitcoin and Other Cryptocurrencies

On the other hand, internet communities and their associated economies are likely to continue to see robust growth in the future. Dogecoin already has a lot of momentum, so rather than disrupting conventional industries, it may see future price growth based use on social media, video games, and other novel, internet-based applications.

A dedicated and active community keeps Dogecoin going, and the future performance of DOGE will depend largely on that community. Overall, though, it does seem like a lot of the money driving the price increases in the wake of Elon Musk’s tweets about Dogecoin is “dumb money,” so to speak. Eventually the novelty has got to wear off and people will move on to something else. 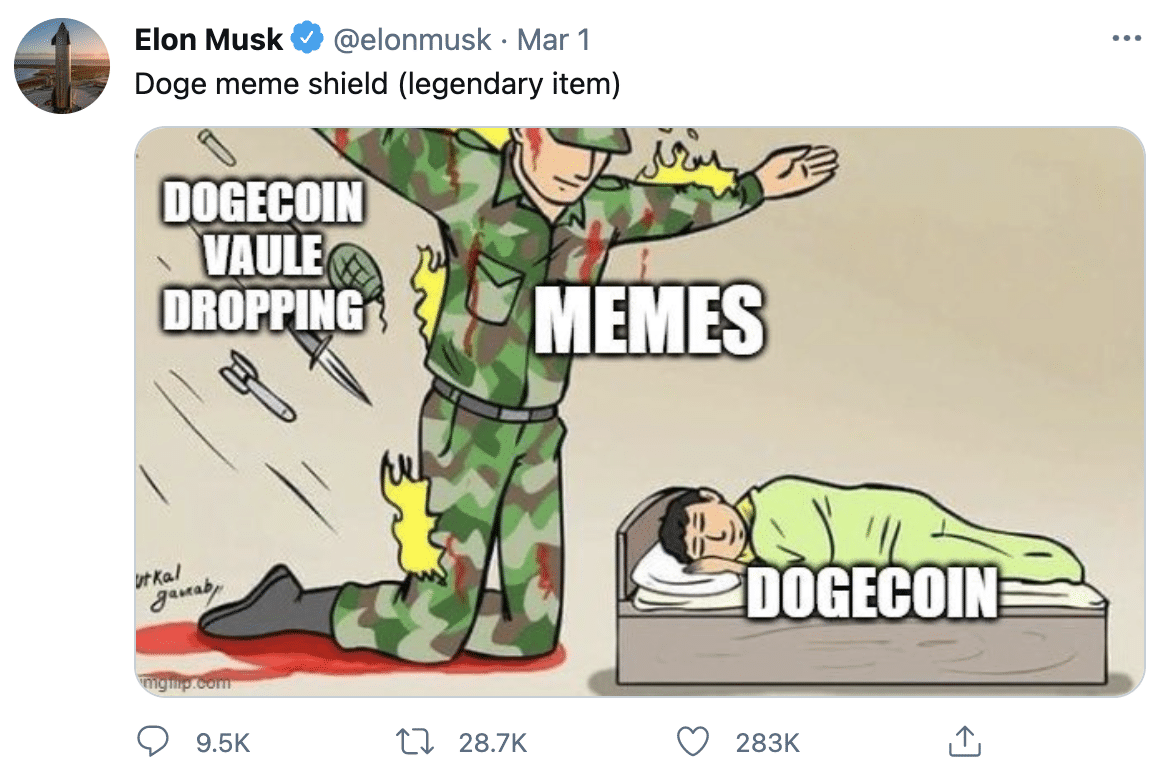 Of course, people have been making similar predictions for years, and so far they’ve been wrong. This is just more evidence that cryptocurrency plays by its own set of rules.